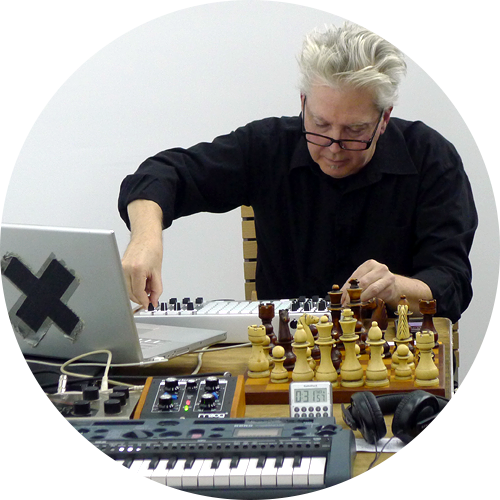 JOHN KING, composer, guitarist and violist, has received commissions from the Kronos Quartet; Ethel; the Albany Symphony/“Dogs of Desire”, Bang On A Can All-Stars; Mannheim Ballet; New York City Ballet/Diamond Project, Stuttgart Ballet, Ballets de Monte Carlo; as well as the Merce Cunningham Dance Co. His string quartets have also been performed by the Eclipse Quartet (LA) and the Mondriaan Quartet (Amsterdam), in addition to the Secret Quartet which has premiered many of his compositions at The Stone (June 2007, May 2015), The Kitchen (April 2009), Lincoln Center Festival (July 2011); and Roulette (Oct. 2014).

He has written 7 operas: ping and WHAT IS THE WORD, with texts by Samuel Beckett, premiered at the Experiments in Opera Festival, spring 2014 and the Avant Music Festival, February 2016; impropera, which used randomly selected text msg’s from the singers’ cell phones; SapphOpera, a chamber opera with text-fragments by Sappho translated by Anne Carson; herzstück/heartpiece, based on the text of Heiner Müller, premiered at the 1999 Warsaw Autumn Festival and presented at the Kitchen NYC in 2000 (a double-opera, co-written with Krzysztof Knittel); la belle captive based on texts by Alain Robbe-Grillet, premiered at Teatro Colon/CETC in Buenos Aires in 2003, and toured to London’s ICA (Fronteras Festival) in 2004 and The Kitchen in 2005; and also his most recent opera, Dice Thrown, based on the Stéphane Mallarmé poem, an excerpt of which was performed by New York City Opera as part of its VOX series in May 2008. The complete staged version was presented at CalArts April 23-24, 2010. And in May of 2015, Piano Vectors, for 6 grand pianos in a large space was premiered at the beautiful 40,000 sq. ft Knockdown Center space in Queens, NY.

He has written songs and incidental music for five plays (The Tempest, Faust, The Trial, Steppenwolf and Wings of Desire) at the Ludwigburg TheaterSommer directed by Peter Kratz. He has been commissioned numerous times by the Brooklyn Youth Chorus, and collaborated with them on their “Black Mountain Songs” project, which premiered at the Brooklyn Academy of Music on Nov. 20, 2014 and went on to tour in Europe.

He has 3 recent CD releases of music for string quartet; 10 Mysteries and AllSteel (Tzadik); and Ethel (Cantaloupe). He was Music Curator at The Kitchen from 1999-2003 and from 2002-2011 was a co-director of the Music Committee at MCDC. He received the 2014 Award for Sound/Music from the Foundation for Contemporary Arts, and is also the recipient of the 2009 Alpert Award in the Arts for Music. He has been a Rockefeller Foundation/Bellagio Center Fellow in March 2016, as well as in residence at the Emily Harvey Foundation in Venice, Italy in July 2015.